If you use REST framework commercially and would like to see this work continue, we strongly encourage you to invest in its continued development by signing up for a paid plan.

Many thanks to all our wonderful sponsors, and in particular to our premium backers, Rover, Sentry, Stream, Auklet, Rollbar, Cadre, Load Impact, and Kloudless.

REST framework now has a first-pass at directly including OpenAPI schema support. (Formerly known as Swagger)

Here's an example of adding an OpenAPI schema to the URL conf:

And here's how you can use the generateschema management command:

There's lots of different tooling that you can use for working with OpenAPI schemas. One option that we're working on is the API Star command line tool.

You can use apistar to validate your API schema:

Or to build API documentation:

You can now compose permission classes using the and/or operators, & and |.

If you're using custom permission classes then make sure that you are subclassing from BasePermission in order to enable this support.

Following the introduction of the action decorator in v3.8, extra actions defined on a ViewSet are now available from the Browsable API. 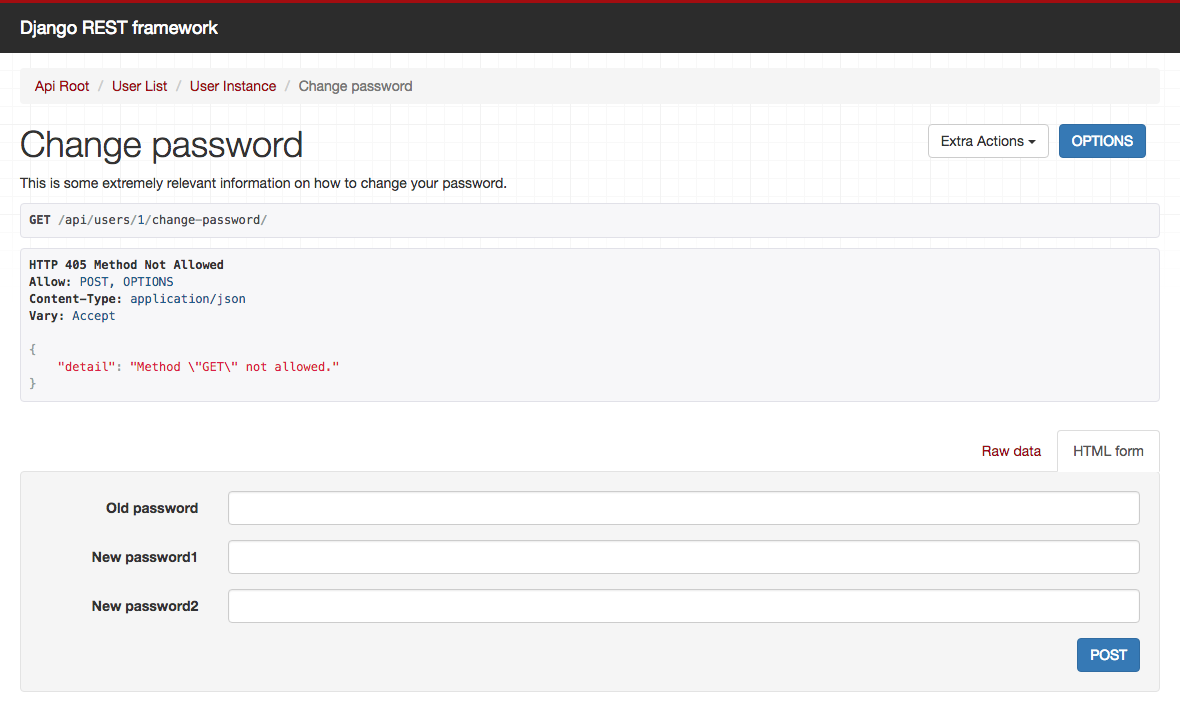 When defined, a dropdown of "Extra Actions", appropriately filtered to detail/non-detail actions, is displayed.

The DjangoObjectPermissionsFilter class is pending deprecation, will be deprecated in 3.10 and removed entirely in 3.11.

It has been moved to the third-party djangorestframework-guardian package. Please use this instead.

Router argument/method renamed to use basename for consistency.

base_name and get_default_base_name() are pending deprecation. They will be deprecated in 3.10 and removed entirely in 3.11.

Both list_route and detail_route are now deprecated in favour of the single action decorator. They will be removed entirely in 3.10.

For APIView you should instead set a schema = None attribute on the view class.

For function-based views the @schema decorator can be used to exclude the view from the schema, by using @schema(None).

There are a large number of minor fixes and improvements in this release. See the release notes page for a complete listing.

We're planning to iteratively work towards OpenAPI becoming the standard schema representation. This will mean that the coreapi dependency will gradually become removed, and we'll instead generate the schema directly, rather than building a CoreAPI Document object.

OpenAPI has clearly become the standard for specifying Web APIs, so there's not much value any more in our schema-agnostic document model. Making this change will mean that we'll more easily be able to take advantage of the full set of OpenAPI functionality.

This will also make a wider range of tooling available.

We'll focus on continuing to develop the API Star library and client tool into a recommended option for generating API docs, validating API schemas, and providing a dynamic client library.

There's also a huge amount of ongoing work on maturing the ASGI landscape, with the possibility that some of this work will eventually feed back into Django.

There will be further work on the Uvicorn web server, as well as lots of functionality planned for the Starlette web framework, which is building a foundational set of tooling for working with ASGI.